He Mahi Māra Kai at Ōpōtiki

Youngsters at the Central Kids Kindergarten were treated to a song, book reading and shared lunch yesterday.

Held in celebrations of Matariki, the morning started with relief carer Odette Anderson giving the children a private reading of her own children’s book “Humble”.

The book, written and illustrated by Ms Anderson, follows the journey of a caterpillar named Humble.

Ms Anderson said the story focused on the values of kindness, play and “being your unique self”, and that she had plans for a few more stories to come.

Also featured at the celebration was a story written by one of kindergarten’s young attendees, Mia McCormack.

Ms Anderson helped her by writing the words, after Mia drew a picture and explained what it meant.

Afterwards, Kelly Robertson and her ukulele led the children in a song about Matariki, and the celebrations finished with books being gifted to the children to take home and enjoy.

According to Ms Robertson, books in the home are important for children. “It’s hugely important to have that literacy in the home,” she said.

Ms Robertson explained that these books were a result of equity and targeted funding the kindergarten had received, which had also allowed them to give every child a rain jacket and boots.

She said there would be other “wellness packages” during the later part of the year, ensuring children were equipped to learn and grow. 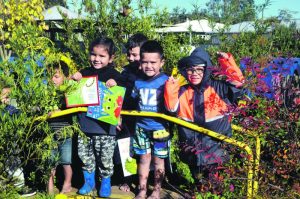